Why the Future of Retail is Offline

Today, we announced Fifth Wall’s $100 million Retail Fund (see coverage in The Wall Street Journal). This fund seeks to invest in emerging brands and retail concepts to accelerate their brick-and-mortar expansion through partnerships with Fifth Wall’s network of more than 50 corporate strategic investors from 11 countries. It also continues the “industry consortium” that Fifth Wall pioneered in that the Retail Fund has added many of the largest, most innovative retail landlords, operators, and service providers as investors in the Retail Fund to help the very companies we’re investing in.

This comes at a time — often referred to as “the Retail Apocalypse” — when investors are generally shifting away from brick-and-mortar retail — which begs the question: Why has Fifth Wall launched this strategy? Below are the observations and logic that make Fifth Wall and our partners so enthusiastic about this opportunity.

The Report’s of Retail’s Death are Greatly Exaggerated

The claim that retail is dying unravels quickly when you look at overall retail sales in the US. They’ve grown each year for the past decade, going from $4.2 trillion to $6.2 trillion, with an annual growth rate of 3.8%.

The softer side points to the same conclusion. Consumer sentiment is incredibly positive, ending 2019 in the 92nd percentile of the University of Michigan: Consumer Sentiment Index’s more than 40 year history. We believe this clearly shows that commerce and the American consumer are very much alive and well.

This is a counterintuitive fact to a lot of people in the venture capital and technology industries. Ecommerce has dominated the discussion around retail because in the past decade online has grown from 4% to 11% of total retail sales in the United States.

What’s often overlooked is the inverse fact: brick-and-mortar commerce still represents 89% of total sales. Let me repeat that: 89% of all retail sales still happen offline. And the shift from offline to online is actually expected to slow in the coming years. Ultimately, consumers vote with their wallets and the results indicate that stores still serve as the center of commerce. 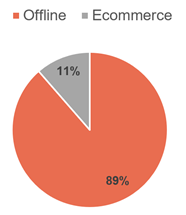 Amazon Isn’t the Only Success Story in Retail

Within the US, Amazon has come to represent 38% of all ecommerce sales in 2019 and grew 25% year over year, according to industry estimates. These are astounding accomplishments, but also well covered by the media.

It turns out, there’s a group of retailers growing even faster than Amazon: digitally native brands. These companies start online, with a direct-to-consumer ecommerce model, as well as a digitally driven dialogue with customers through social media, email, and more. While the success of pioneers like Bonobos and Warby Parker has been documented, the overall momentum and magnitude of this movement is not as well understood or quantified. One reason is that there are just so many of them…literally thousands and thousands of such brands, and in aggregate they are growing faster than Amazon. Through a combination of internal research and alternative data sources, Fifth Wall estimates that 200 leading digital retailers alone generated approximately $36 billion of sales and grew at 46% year over year in 2018 — again faster than Amazon. Basically, Amazon is growing really fast, but we believe these new brands are potentially growing faster.

Ecommerce has Made it Easier than Ever to Launch a Brand

In the last decade, on-demand tools have made it easier than ever to set up and operate an ecommerce business. Digital platforms like Shopify (storefront), Mailchimp (email marketing), Zendesk (CRM), and many more have taken enterprise-grade capabilities and packaged them into on-demand SaaS offerings requiring virtually no setup, let alone technical expertise. Even warehousing, fulfillment, and shipping can be outsourced to modern third-party logistics companies, such as Quiet Logistics.

These platforms lower the barriers to entry in ecommerce, so it’s not surprising that the number of emerging retailers operating online has skyrocketed. Shopify alone has gone from hosting 41,000 merchants in 2012 to one million in 2019. Today Fifth Wall actively tracks over 1,000 digital retailers, and we believe that number will grow dramatically in the coming years.

But Brands Struggle to Scale with Ecommerce Alone

While it’s never been easier to launch a brand online, it’s counterintuitively becoming harder to sustainably scale a brand through ecommerce alone. First, shipping and returns are incredibly expensive and yet something the vast majority of consumers have come to expect for free. Today, it’s not uncommon to see ecommerce return rates as high as 30% of total sales (compared to brick-and-mortar at 8%). For a new brand to grow, it has to acquire new customers. Online, that generally means digital advertising on networks like Instagram, Facebook, YouTube, and Google. The average advertising cost of these channels has increased five times faster than inflation as more and more brands compete for the same audience.

The compounding effect of these costs can be crippling, which is why even some of the largest ecommerce companies in the world, like Wayfair with $8.6 billion in annual sales, have been unprofitable for years. The pressure on emerging brands is even more severe given their lack of scale and resources.

Digitally native brands see the challenges of an ecommerce-only strategy and we believe many recognize that expanding into offline, with brick-and-mortar stores, is a more viable, sustainable path to mainstream scale and overall profitability. Research shows that in-store customers are far more profitable than ones that shop only online: they spend 83% more and return 64% less. And as mentioned above, 89% of commerce still happens offline, so the pool of potential new customers that stores unlock for digitally native brands is multiples larger.

This last point is almost true by definition: because they are born online, digitally native brands often lack offline expertise in real estate and retail operations. Similarly we’ve observed that many traditional VCs lack the experience to meaningfully engage on issues like site selection, store design, merchandising, and staffing.

As the largest venture capital firm focused on technologies for the global real estate industry, Fifth Wall has assembled a strategic consortium that includes many of the largest retail real estate owners and service providers in the US and globally, including Acadia Realty Trust, Cushman & Wakefield, Macerich, Nuveen Real Estate, and many more. We believe this investor network of retail landlords can help support new brands and retail concepts in their expansion into brick-and-mortar stores.

So, that’s why we built the Fifth Wall Retail Fund. In our view, emerging brands want access to large retail landlords to fuel their offline expansion, but they generally do not want these corporate partners to invest directly into their business. The Fifth Wall Retail Fund represents a strategic consortium that includes many of the largest retail landlords who we believe WANT these brands to succeed in their offline expansion.

We’ve already seen early strategic partnerships successfully come together under this model. To date, Fifth Wall has made over 100 introductions between our real estate partners and emerging retailers (both inside and outside of the Retail Fund’s portfolio), which has driven collaboration on nearly 50 stores. We believe this digitally native movement is a once-in-a-generation shift that is just getting started and we look forward to supporting this “Retail Renaissance”.