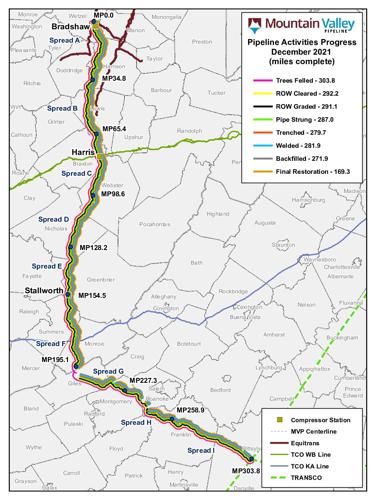 West Virginia is an energy powerhouse, and it’s no secret the work we do here keeps the lights on across our country and throughout the world. In fact, natural gas production has grown 770% over the past decade — thanks to the advances in hydraulic fracturing and horizontal drilling technologies — edging the Mountain State up to be the nation’s fifth-largest energy producer.

But without modern pipeline infrastructure, there’s no way to move energy from where it’s produced to where it’s needed.

Natural gas and oil development is an economic and environmental winner for the entire region. Families and communities rely on the good-paying jobs, investments in manufacturing, and small business support that energy production generates.

In 2019, West Virginia’s natural gas and oil industry supported more than 82,000 well-paying jobs, contributing over $11.2 billion to our economy.

And thanks to the homegrown energy produced in our backyards, West Virginians save billions in household energy costs – $4.3 billion in 10 years (2006-2016), to be exact, according to theConsumer Energy Alliance. For commercial and industrial natural gas users, those savings amount to $2.7 billion.

In order to build on that success, we must commit to expanding and building new pipelines, transmission systems, and processing facilities to deliver more affordable, reliable energy.

Pipelines are the safest and most efficient way to transport natural gas, and they’re overwhelmingly safely built by skilled building trades men and women. But politics, government red tape and “Keep it in the Ground” extreme activism aimed at ceasing the development of all fossil fuels have stopped, blocked, or delayed critical pipeline projects that would improve access to affordable, abundant energy.

Locally, the Mountain Valley Pipeline is facing some of the same hurdles that led to the cancellation of other pipelines, like the PennEast Pipeline a few weeks ago and the AtlanticCoast Pipeline last summer.

Mountain Valley, expected to go into service next year, spans more than 300 miles from northwestern West Virginia to southern Virginia, with a proposed extension to increase service to fast-growing North Carolina communities.

Pipelines to move gas to the Southeast, New England and Midwest markets are critical to fueling economic growth while helping states reach their climate goals. Just in North Carolina, natural gas use for electricity generation grew 13-fold from 2005-2018, and one in every four homes depends on natural gas for heating.

But regulatory delays and pipeline blockades threaten the success of MVP and risk burdening consumers as they have in New England, where anti-domestic energy policies force consumers to rely upon imports to meet demand — despite being within a stone’s throw of the Marcellus and Utica shales.

To continue driving economic growth, keep the lights on and achieve clean air progress in WestVirginia, we need a business-friendly environment that attracts pipeline infrastructure development and related downstream investments such as manufacturing.

We must prioritize making improvements in our country’s pipeline infrastructure network for the sake of all West Virginians, our nation’s energy security, and our world’s environmental well-being.