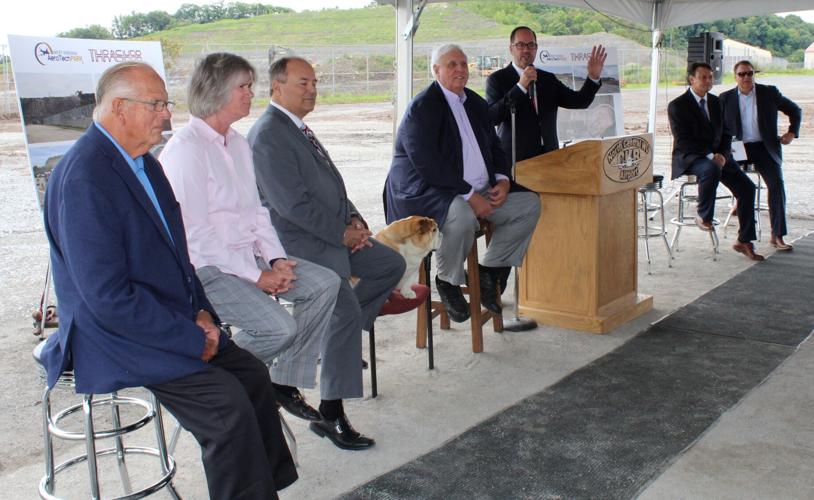 Gov. Jim Justice — along with a host of local leaders and officials — participated in a ribbon-cutting ceremony marking the completion of site development for the West Virginia AeroTech Park.

“Without any question, always, the airports are the heart; they’re the lifeblood of the engine that makes everything go,” Justice said. “You think of what you’ve got going on here. It is off the chart; it is un-flat-believable what’s going on.”

The AeroTech Park will house the airport’s new terminal building, an expanded taxiway, an enlarged parking lot and will provide ample build-ready land for the continued growth and development of the region’s aerospace industry.

The park’s future site is now flat and level, but just a year ago, the stretch of land adjacent to W.Va. 279 was buried under approximately 3 million square feet of earth that officials called “the mountain.”

Ron Watson, former Harrison County commissioner and former president of the Benedum Airport Authority, which governs the airport, said officials had long hoped to “move the mountain” to clear space for a new terminal building.

“The mountain has always been something that we wanted to get rid of, but we never had the means, and we really didn’t have a good plan,” he said.

“Before we could do the terminal, we had to get rid of the mountain. That was a long time in the making, and I am delighted to see the progress.”

Airport Director Rick Rock, looking out over the crowd assembled for the ribbon cutting ceremony, thanked the public for always supporting the airport.

“One of the finest lessons I learned when I started this job was to get the community to take ownership of it,” he said. “Right here is an example of a community taking ownership of it. I appreciate it — without you none of this is possible.”

The site development project, handled by Wolfe’s Excavating, was seeded by a state-backed investment announced by Justice in August 2019 — a $10 million grant from the West Virginia Infrastructure and Jobs Development Council and a $10 million loan from the state Economic Development Authority.

On July 8, the Federal Aviation Administration announced the airport would receive a $15 million grant, the final element needed to greenlight the terminal’s construction.

“It was a matter of just getting everybody to the table one-by-one — whether that was the (Federal Aviation Administration), the (West Virginia Department of Environmental Protection), the state, the governor’s office, the Development office, just on and on — to realize what this project could do for North Central West Virginia,” he said.

Construction of the terminal building is expected to begin next year, Lang said.

“We should be started on the terminal, digging footers, in the spring,” he said.

The expansion project is estimated to lead to direct contributions of more than $587 million to the state’s economy each year, according to economists at West Virginia University.

The total economic impact of construction expenditures for the airport’s terminal expansion project is estimated to be $88 million, of which more than $55 million will be spent directly, and another $33 will be generated in secondary industries, according to analysis from the WVU Bureau of Business and Economic Research.

The terminal expansion project is estimated to employ about 356 construction workers directly, and another 199 in supplier industries, for a total employment impact of 555 jobs.

Growth at the airport is estimated to add an additional $16.7 million in expenditures in the local economy over 10 years. Counting secondary impacts, it’s estimated this spending will result in more than $28.5 million in total economic impact over the same 10-year period.

Expansion on the airport’s campus is expected to allow for the addition of seven to 11 small-to-medium-sized businesses that will either expand or locate in the area, for a total of more than 1,300 new jobs.

The airport is one of the main reasons North Central West Virginia is one of the state’s two primary centers for economic activity, according to WVU’s John Deskins.

“This airport and this aerospace sector in Harrison County is one of the key, foundational pieces that is enabling North Central to be a standout region,” he said. “I think that’s pretty important.”

Original Article by Charles Young on August 22, 2022 on wvnews.com