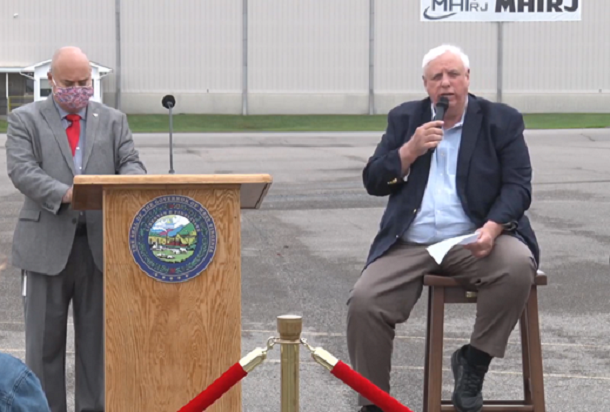 There was some good news this morning for Bridgeport and North Central West Virginia. Gov Jim Justice was in town to announce a city business will be adding to its job base in a substantial way. And the jobs will be coming to a business at the North Central West Virginia Airport.
Mitsubishi Heavy Industries (MHI) facility, formerly Bombardier Aerospace, will adding 240 additional employees to its workforce. According to Justice, since June the company has witnessed the workforce go from 319 workers to 517.
“MHI will be hiring over the next few months between now and March of 2021 bringing their total workforce to approximately 750 people,” said Justice outside of the Bridgeport facility of MHI. “…It’s unbelievable really what you’ve got going on here … The job growth and potential are off the charts.”
Justice said the announcement was “incredible.” He then lavished praise on the airport, which is jointly owned by the Harrison and Marion County Commissions for its aviation industry that has an annual economic impact of more than $1 billion and a workforce exceeding 1,300 employees. Justice also talked about the opportunities still ahead with more acreage available for development and by having a 7,800-foot runway – the state’s longest commercial runway.
“There’s more and more to come,” said Justice, who was introduced by Harrison County Commissioner and Benedum Airport Authority President David Hinkle.
In 2019, word broke that Mitsubishi was looking to do a massive deal to acquire the regional jet line business – which included the site in Bridgeport – from Bombardier. The cost of the deal was more than $500 million and saw Mitsubishi take the place of an airport tenant in place for nearly three decades.
Officials assured the public at meetings of the Benedum Airport Authority – the airport’s governing body – that the move was going to positive. Today’s announcement reflects that.
Along with the jobs announcement today, the Airport Authority recently announced upgrades to the Mitsubishi facility of nearly $2 million are in the works.
Editor’s Note: Photo shows Gov. Jim Justice, right, addressing the crowd as Commissioner and Airport Authority President David Hinkle looks on.