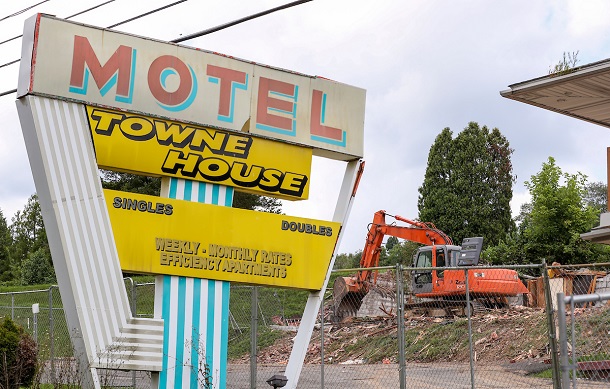 It stood in Bridgeport for decades. As of Thursday, there wasn’t much left standing of the once thriving Towne House East Motel off of Main Street. Workers with Lyons Excavating have been leveling the structure for some time now. The company is doing $196,000 worth of demolition work that includes items done before the building started coming down and items to be addressed once it’s completely down.

“We are actually ahead of schedule, which is great news,” said Bridgeport Community Development Director Andrea Kerr. “All the asbestos has been abated and properly disposed of and as of (Wednesday) the building is just about down.” That doesn’t mean the work is finished. The contract signed with Lyons has a completion date of Oct. 31, said Kerr. While that doesn’t mean they have to be on site until that date, it does mean there are other items that will be addressed.

“Once everything is done, the area will need to be seeded and mulched,” said Kerr. “There’s other things that will also be taken care of, but it’s important the property looks nice until a decision is made for what will be put in place there.” The building on Main Street (U.S. Route 50) is near Twin Oaks. The lot provides two things that are a commodity hard to find along the corridor – road frontage and deep property in the rear.

The entire parcel covers 2.734 acres and was purchased for $975,000. There has been discussion of putting a new city fire station, a police station or a combined version – or perhaps one and not the other – on the parcel. Nothing, however, is close to definitive. “I’m kind of excited to see the decision Council makes for the property,” Kerr said. “It’s a great piece to have ownership of and provides the city with a lot of options and opportunities.”

Now, the area still has debris as a result of the construction. Remnants of the motel were visible as a scoop of material being pulled away had an old mattress cover hanging from it – a visible sign of the long-standing business that had faded into the past. 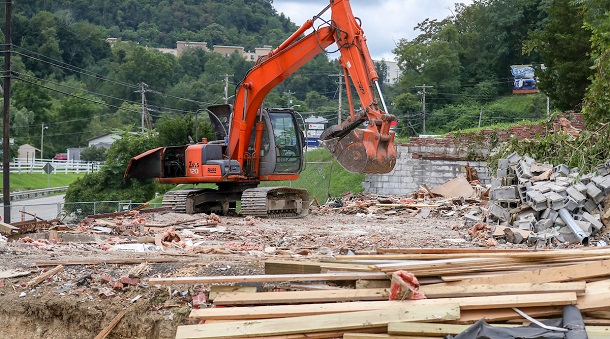