An Old Fight with New Weapons 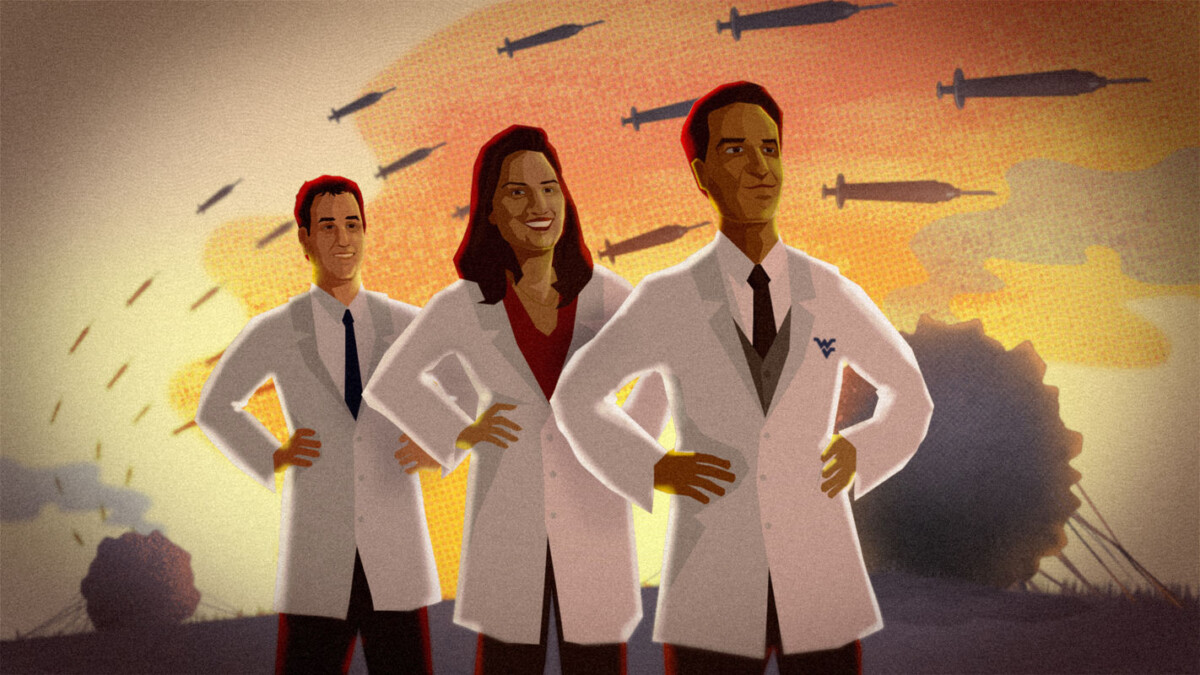 A lot has changed since President Richard Nixon declared a “war on cancer” by signing the National Cancer Act in 1971. Diagnoses are made sooner. Treatments are more precise. Awareness is up. Mortality is down.

But just because cancer survival rates have improved overall doesn’t mean we’re ready for the victory parade. Take lung cancer, for example: in 2020 alone, it killed 600,000 Americans. To put that number into perspective, it would take about 10 Vietnam Wars to equal that many American casualties. That’s the case even though the Vietnam War had been going on for nearly 20 years before Nixon ended it in 1973 — two years after his war on cancer began.

“If you look at the global picture, the No. 2 type of cancer in the world is lung cancer in males and females,” said Ivan Martinez, a researcher with the West Virginia University Cancer Institute and School of Medicine. Among cancers, it’s also “the No. 1 killer in the world.”

In today’s cancer battlefields, Martinez and his colleagues at WVU want to know and defeat their enemy. They’re studying how some of the most stubborn cancers — including lung, pancreatic and triple-negative breast cancer — respond to treatments, down to the molecular level. What they learn can add to our knowledge of the disease and increase our proficiency with the weapons we already have.

‘I never saw something so black and white’

Martinez is investigating how RNA — ribonucleic acid, which controls the chemical activity within cells — can influence lung cancer’s response to radiation therapy. By now, you’ve probably heard how messenger RNA is revolutionizing multiple COVID-19 vaccines in how it teaches the body to recognize the coronavirus as a threat and deliver an immune response. In a study funded by the National Institutes of Health and the West Virginia Clinical and Translational Science Institute, Martinez found that an abundance of one type of RNA was associated with better sensitivity to radiation treatment.

He and his team analyzed a human lung cancer cell line after it was radiated in a way that simulates treatment for lung cancer patients. Then they analyzed how the cells’ RNA behaved and paid special attention to which types of RNA the cells’ DNA copied.

“This is very interesting because it means that only male patients have this,” said Martinez, who is also an associate professor in the Department of Microbiology, Immunology and Cell Biology.

Next the researchers got a new batch of lung cancer cell lines from other male patients, some resistant to radiation and some sensitive to it. They radiated all of them and observed what happened to the lncRNAs. Cells that were sensitive to the radiation, and would likely benefit from the lung cancer treatment, pumped out lncRNAs.

“But when we did the same thing with radiation-resistant cells, this lncRNA expression was dead. Gone. There was nothing there. In the decades of my career, I never saw something so black and white.”

The cells that were resistant to radiation as a cancer treatment had also lost their Y chromosomes completely. These insights may improve how doctors treat lung cancer one day. For instance, if a lung cancer sample taken from a male patient still has a lot of Y chromosomes in it, his doctor may decide to proceed with radiation. If, however, the Y chromosomes are absent, she may choose another treatment.

“But I also see this from a mechanistic perspective,” Martinez said. “What exactly is this lncRNA doing? What is it binding to? What is it interacting with to help the cell to be more sensitive to radiation? We have some clues, but we don’t know yet in detail. My idea is that if we identify what exactly it’s doing, we can artificially put that in cells that are resistant and use it as a therapeutic.”

Martinez doesn’t think these therapeutics will stop with lung cancer — or even with cancer in general — either.

“We live in an RNA world,” he said. “The more we understand these RNAs, the more I think we’re going to find better diagnostic therapeutics for cancer and, really, any human disease. The most obvious example that we have right now is RNA vaccines.” Martinez isn’t the only cancer researcher whose work relates to vaccines.

Sobha Kurian, an associate professor in the WVU Department of Medicine, is conducting a national clinical trial of a vaccine for breast cancer.

She and her team aren’t testing the vaccine as a cancer preventive. Instead, they’re pairing it with pembrolizumab, an immunotherapy drug, to see if it helps breast cancer patients’ immune cells recognize tumors that normally camouflage themselves and avoid detection.

Although pembrolizumab is a well-established immunotherapy treatment, the vaccine itself is new. Kurian and her colleagues hope the vaccine will make the older drug more effective by marking the cancer cells as enemies for the immune system to target.

Kurian’s trial, sponsored by the National Surgical Adjuvant Breast and Bowel Project Foundation, focuses on patients who have advanced triple-negative breast cancer. This type grows and spreads faster than others and has limited treatment options. It won’t respond to hormone-blocking treatment.

The American Cancer Society reports that — overall — 90 percent of women receiving a breast cancer diagnosis will live at least five more years. But women with triple-negative breast cancer tend to fare worse. On average, only 77 percent of them live five years post-diagnosis.

“Most of the triple-negative cancers fall under the highly aggressive biology,” Kurian said. “They grow faster. They come in younger people. They’re more aggressive than some of the hormone-receptor-sensitive breast cancers.”

If the results of this trial — and others like it — are favorable, then combining vaccines with immunotherapies could become a treatment option for triple-negative breast cancer and other cancers.

“There are a lot of different vaccines in different trials, and each one has its own little twist to it,” Kurian said. “No one kind works for all. Each one has to be especially tailored to that situation.”

Sometimes after a tumor has been surgically removed from the breast, microscopic remnants of the cancer — called micrometastases — remain. More of these remnants mean more of a risk that the cancer will come back.

“In the future, a vaccine may be something to target those, because we cannot actually see them even though we know they are there, especially in breast cancer,” Kurian said. “Maybe a vaccine would do more to remove them in the earlier stages when it’s more curative.” And while preventing breast cancer isn’t within the scope of Kurian’s study, she noted that other vaccines already play a role in preventing cancer. As an example, she pointed to the HPV vaccine, which prevents the human papillomavirus.

To call the HPV vaccine a triumph might be an understatement. The Centers for Disease Control and Prevention reports that among vaccinated women, HPV-associated cervical precancers have declined 40 percent. Even more striking: infections with HPV types that cause most HPV cancers and genital warts have dropped 86 percent in teenage girls.

When the standard isn’t good enough

If the prognosis for triple-negative breast cancer can be sobering for some, then the outlook for pancreatic cancer can be downright grim.

Brian Boone, an assistant professor in the WVU Department of Surgery and the Department of Microbiology, Immunology and Cell Biology, specializes in pancreatic cancer.

“Even when we do a great operation, and the patient recovers well — they get all the intended chemo, and everything goes great as part of the standard-of-care approach — the survival is only about 35 percent,” he said. “Clearly we need to be doing more than the standard, which is why I’m really excited to have a trial like this.”

In a new clinical trial, Boone and his team are seeking better outcomes for pancreatic cancer patients by improving surgical cancer intervention. They previously discovered that a natural wound-healing response, called neutrophil extracellular traps (NETs), actually promotes the growth and spread of tumors after surgery. Now the researchers plan to mitigate this effect with the help of hydroxychloroquine, an anti-malarial drug that also treats lupus and rheumatoid arthritis.

Neutrophils help to protect your body from invaders. When they’re stimulated, they attempt to trap and kill bacteria by shooting out all of their cellular contents like a spider’s web, forming NETs.

Neutrophils are abundant in the body. And they’re often found in tumor microenvironments, the group of immune and structural cells that form a sort of scaffolding around tumors. The tumor microenvironment is particularly important as pancreatic tumors are actually made up of about 90 percent of these other cells and only 10 percent cancer cells.

Boone has shown that NETs form in pancreatic cancer and promote scar tissue in the scaffolding around the tumor, preventing other immune cells and chemotherapy from entering it.

“I think of the tumor microenvironment as a wound that never heals,” he said. “The response of the whole body is to try to form new blood vessels, bring in nutrients and bring in immune cells that actually just promote the tumor to grow.”

He also has evidence that the trauma of surgery itself may induce NET formation at tumor sites.

In an approach that has never before been tried, Boone now plans to conduct treatment with the hydroxychloroquine/FOLFIRINOX combination before, during and after surgical intervention in a new clinical trial funded by the WVU Cancer Institute and West Virginia Clinical and Translational Science Institute.

The goals of the new trial are to determine that this treatment combination is safe to continue through surgery and afterward, and to inhibit the NETs that allow tumors to grow.

Boone and his team plan to enroll 40 patients over a two-to-three-year period for the trial, which will include dose escalation: starting at a low dose and increasing to a higher dose to determine safety and efficacy. The trial proposal is currently going through the Internal Review Board process at WVU and is expected to begin soon.

“It seems like this process of NETs is involved in so many steps in what makes pancreatic cancer so aggressive, which is why we’re really focused and trying to attack it in this way,” Boone said. “And fortunately, we can use a drug that’s already been around for a long time and we already know is pretty safe.”

Each of the presidents who followed Nixon into the White House have tried to further cancer research in their own ways. In March, President Joe Biden said that he envisioned “significant strides” in fighting cancer “if we take a slightly different approach.” He thinks “we’re on the cusp of some real breakthroughs across the board on cancer.”

Biden himself has witnessed the wrath of cancer in his own family. His eldest child Beau suffered from a brain tumor and was diagnosed with an aggressive form of brain cancer in 2013. He died two years later at age 46.

When Biden served as Barack Obama’s vice president, he led the Cancer Moonshot initiative, which launched in 2016. The national effort has supported research into advancing the prevention, diagnosis and treatment of cancer — including at the WVU Cancer Institute.

“I’ve been here 20 years,” Kurian said, “and I think in the last five years, more ways of targeting cancer more precisely have opened up.”